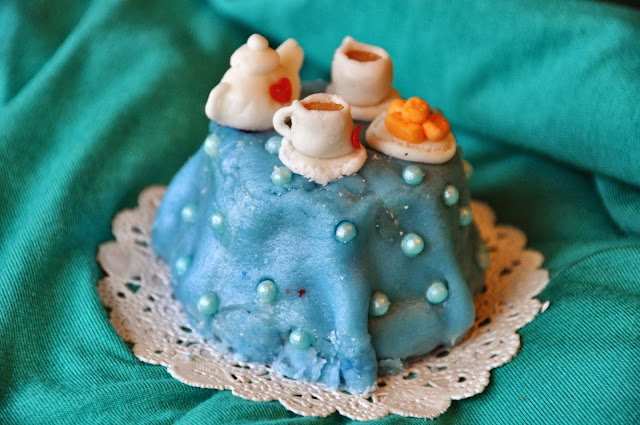 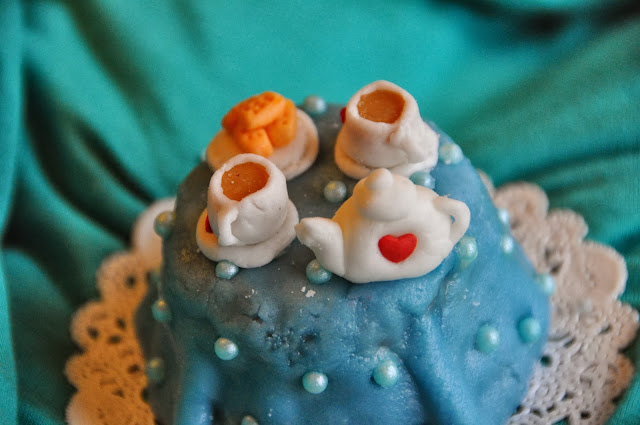 Today I got a sour-coated message from life. It sucks. I’m probably being dramatic; it’s been a rough week… First world problems 😉 It was U.N. Day at school. U.N. day comes second in rank after the last day of school. In our school, the main hallway and gyms are filled with tables representing each country- it’s like all the moms have a psychological  competition of who can create the most extravagant table. The Indian table, for example is covered in patterned table cloths. On each side you can see the intricately carved furniture. The background is decorated in traditional clothing and colored crepe paper. There’s mehndi, samosas and paneer. People always line up for the samosas.

I’ve been in this school for 9 years, and UN day’s never gotten old- until now. The British table had a cupcake decorating competition, and I did sign up. My cupcake theme was a tea party, as illustrated in the photographs above. The table is made out of blue fondant, homemade, of course. I stuck sparkly blue balls all around it to add texture. The tea pot, plates and cups of tea are sculpted in white fondant. The actual tea is a peanut butter chip wrapped in fondant. I also dyed a small piece of fondant peach, and molded it to resemble shortbread. The color of the cupcake it’s self is red- a red velvet cupcake, coated in white cream cheese icing and then wrapped in blue fondant. I used this color scheme to symbolize the colors of the British flag. I placed the cupcake top side down onto a dolly as well.

Personally, I think it represents the British theme well. It took several attempts before I was satisfied with my creation: When making the drape for the table, the fondant continually broke and stuck to the surface; it took several hours, and it was my second time working with fondant- first time making such intricate details.

The director of the school was the judge, and three cupcakes were chosen as the winners. Mine wasn’t selected. I was disappointed. It’s been really busy at school, and I had spent a good chunk of time and energy over this tiny creation. Everything was made from scratch- from the cupcake to the fondant. I never received any assistance, and everyone took photos and touched the decorations to check if they were real. I never win anything, so I was really hoping to get some recognition- haughty as it sounds. I love baking, so it would have been so cool to get recognized for something I’m passionate about.

On top of that, I can’t get a visa to Ukraine, where our cross country meet is. It is the only opportunity for our team to participate in a race this year. I missed it last year, so I was very much looking forward to traveling. I’m pretty bummed. But hey, here’s the bright side: I decorated a cupcake I am completely proud of. I don’t think many 15 year olds can mold fondant that intricately.